How was your weekend? I spent mine reading The Signs and Wonders of Tuna Rashad by Natasha Deen and couldn’t wait to share my thoughts on it, so I didn’t want to postpone reviewing it.

Title: The Signs and Wonders of Tuna Rashad • By: Natasha Deen

From award-winning, #OwnVoices author Natasha Deen comes a new funny, honest, YA novel following one girl as she tries to win over her crush before she leaves for college.

Let’s be clear. No matter what her older brother, Robby, says, aspiring screenwriter Tuna Rashad is not “stupidstitious.” She is, however, cool with her Caribbean heritage, which means she is always on the lookout for messages from loved ones who have passed on. But ever since Robby became a widower, all he does is hang out at the house, mock Tuna for following in their ancestors’ traditions, and meddle in her life.

Tuna needs to break free from her brother’s loving but over-bearing ways and get him a life (or at least, get him out of hers!). Based on the signs, her ancestors are on board. They also seem to be on board with helping Tuna win over her crush, Tristan Dangerfield. The only hiccup? She has to do it before leaving for college in the fall. A ticking clock, a grief-stricken brother, and a crush who doesn’t believe in signs. What could possibly go wrong?

I received a copy of this book from Running Press courtesy of NetGalley in exchange for an honest review. All thoughts and opinions expressed here are my own.

Heart in love is the loudest sound in the room.

➼ Tuna is the definition of extra

Next to my best friend, I think Tuna was the most dramatic person I have met so far. Okay, technically, it was read so far but you get the point. She was a force to reckon with and boy, I enjoyed every second of this book.

Tuna was a screenplay-writer in the making, who took her dream seriously. Her mind was constantly writing and editing scenarios; be it impressing her crush or helping her brother, she was on the go to come up with a story, of course with the help of signs from her ancestors. She was venturing too much into the shenanigan-territory to impress her crush, Tristan, and it was hilarious how none of those plans went according to her calculations.

This is the kind of book that can lift your spirits and make you emotional at the same time.

Rashads were the epitome of family dynamics. They had a good rapport with each other and would never miss a chance to bicker. While Robby was going through a rough time, his family had his back. They even ate whatever “food” he cooked though they’d rather eat anything but that. Rashads were simply the best!

Reading some books feels like a warm hug on a very exhausting day. This book would fall right under that category for me. I felt relaxed and was laughing at Tuna’s incessant ramblings about her crush or her brother. She would conjure rom-com arcs in the least expected moments and try to make it work for her. My stomach hurt from laughing at her shenanigans. Though I’m partial to reading first-person POVs these days, I didn’t mind reading her story. This book felt like a crossover between Becky Albertalli and Nicola Yoon’s books, perfectly balancing the humor and grief to weave a comforting story about love and family.

Tuna and Robby may disagree and argue about every little thing under the sky and beyond but their love for their new dog, Magic, was immeasurable. Everyone in the book loved Magic and it was a fact. She was the new addition to the Rashad family and when things were tense between Tuna and Robby, she was their buffer. I could picture them arguing about picking Halloween and Christmas costumes for Magic. That’d be the Rashad siblings, you all. Tuna and Robby playing dog-parents made the book more adorable.

If all the things I’ve mentioned about Tuna didn’t convince you that she was the sassiest and the wittiest character, then you haven’t read about her speaking Victorian when she was angry. It was highly entertaining, especially when it was returned to her with the same intensity.

I went into this book thinking I’d read a melodramatic story but this book was full of surprises and was dramatic in the literal sense. Tuna was superstitious, believed in signs, and was the most relatable person in the book. I loved reading about her relationship with her brother, Robby. He lost the love of his life unexpectedly and couldn’t move on from his loss. His husband, David, wasn’t just his love but was precious to the Rashads too. They couldn’t grieve openly in front of Robby, worrying it might pain him more. But the Rashads needed their old their factoid-Robby back but he was pushing down his grief and would close off whenever someone mentioned David’s name. It took some meddling and harsh truths to make him take the next step but in the end, the Rashads patched up the cracks that were trying to sever their ironclad family bond.

However, the romance arc didn’t go as I imagined. It felt suitable to the story, so I’m fine with how things ended.

To conclude, The Signs and Wonders of Tuna Rashad by Natasha Deen is easily my new comfort read that I’d recommend to anyone who needs a heartwarming story with a hearty dose of humor.

Her family moved from Guyana to Canada* to escape the country’s growing racial and political violence.
She loved growing up in a country of snow and flannel, but sometimes, being the only mixed-race kid in class meant being bullied and feeling invisible because there were no reflections of her on TV or in movies, and it meant growing up feeling different from everybody. Thank goodness for books and comic books. They were full of weird, oddball, don’t-quite-fit-in characters who turned out to be amazing and cool and found their happy endings.

These days, Natasha writes for kids, teens, and adults, and she loves mixing mystery, action, and creepy with a whole lot of humour. Her books have been described as “gripping” (School Library Connection), “engaging” (CM Magazine) and “feel good” (VOYA).

And her final confession? Writing is the hardest thing she’ll ever do, but she loves it because writing is story, and our stories change the world.

*Natasha was born in Canada, but moved to Guyana when she was three-weeks old. She grew up in Nandy Park (south-west of Georgetown) before returning to Canada when she was five.

What was the last book that made you laugh till it hurt?

“This is real life and it’s always weirder than fiction.” 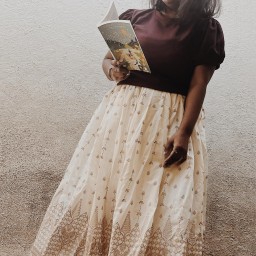 Hi, this is Isha (She/Her). I'm a twenty-something Indian blogger who reads mostly YA, Fantasy, and Contemporary. paperbacktomes (paperback +tomes) is my small corner to speak everything and anything about books. Sometimes I might write about EXO, anime, or K-dramas too.